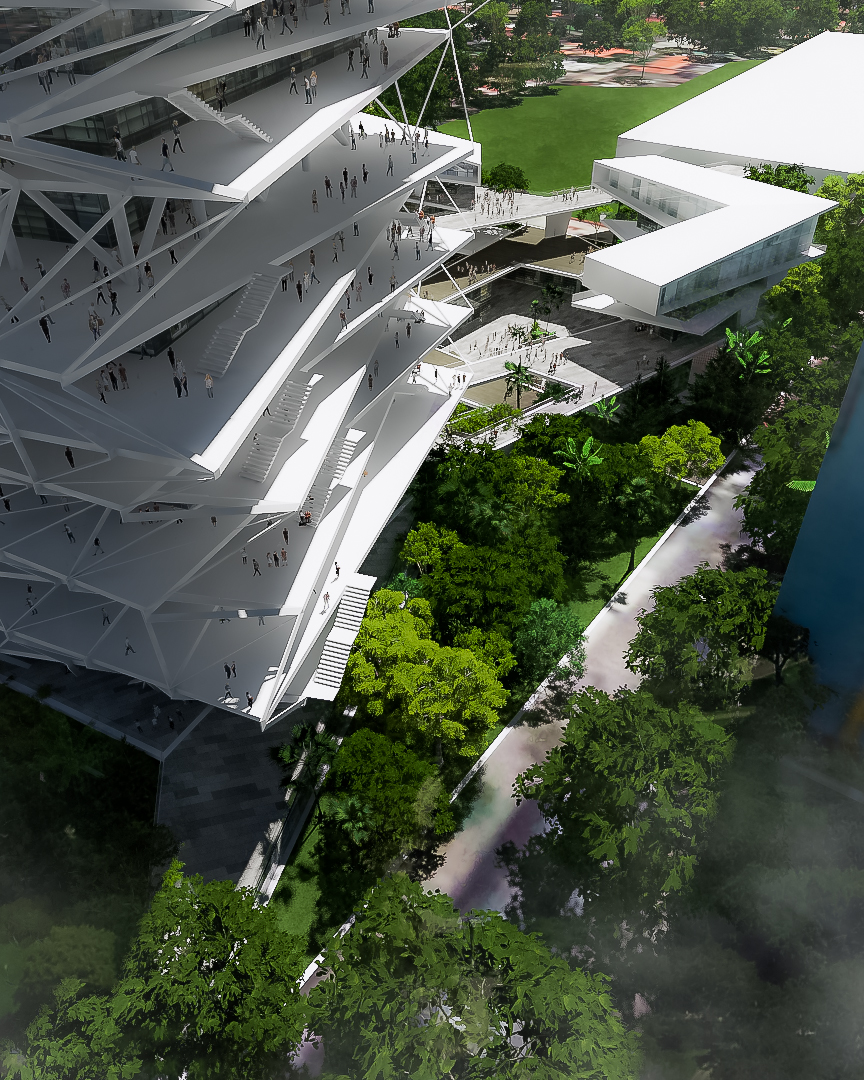 Having started our practice as two foreign architects based in Japan and developing projects in diverse countries different from our places of origin allowed us to grow what we call a ‘nomadic identity’. Through our experience, we regard identity and nomadism as two terms that have become closer in our contemporary culture.
If related to places, both emerge from opposite relationships. Identity sprouts from the roots we grow after being exposed to a place for a long period of time, while nomadism is a given condition that arises from the impermanence of a person in only one place. If related to individuals, nomadism can be a choice but identity is not possible in a placelessness scenario. Hence nomadic identities are becoming a common ground for practitioners within the architecture discipline.

Metabolist architect Kisho Kurokawa coined a term during the 60’s foreseeing the rapid intensification of movement for future societies: Homo-Movens. If well not all the aims and aspirations of Metabolism came to be tangible, still this particular idea of nomadism introduced by Kurowaka is valid today to rethink contemporary urbanism as a theory of networked cities. John Moravec would coin more recently the term ‘know-mad’ to identify a group of individuals capable to work with anybody, anytime and anyplace. 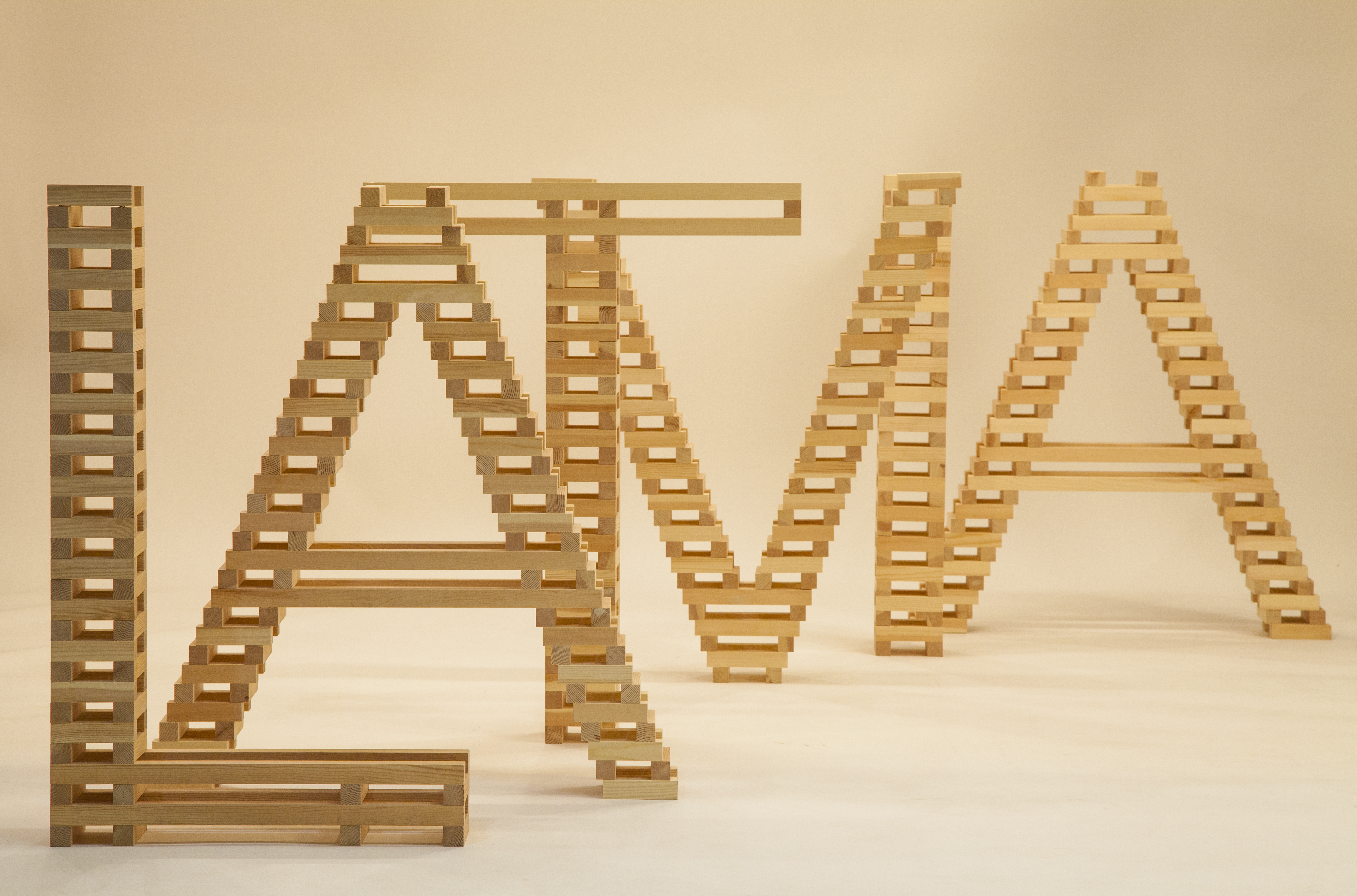 Indonesia
Our first commission was a proposal for a multifunctional complex 15 km away from central Jakarta. As capital of Indonesia, Jakarta is one of the largest human settlements, ranking among the ten largest cities in the world. Mobility and pollution are constant issues, as much as the lack of cultural and educational facilities for the growing population. The site was within the limits of a large amusement park planned during the mid 70’s known as Taman-mi, whose main theme is related to Indonesian culture.
Our proposal had to take into consideration traditional Indonesian architecture, such as roof structures made of palm-tree and areas that could provide shadow during all day. The site of 25 hectares needed to contain diverse facilities for entertainment, culture, shopping, education and lodging among others, with special attention to cinema culture, given the fact that the client was a renowned Japanese film company. We decided to tackle this large scale project as a small city, breaking the program into small thematic cities. Our proposal contained several ‘pavilions’ beneath a large steel structure covered in palm-tree that could allow the air to flow from bellow and be extracted through large openings above. The idea was based on the Roman concept of ‘impluvium’, a rectangular basin in the center of the atrium of ancient houses surrounded by a semi-open space preceding closed areas. This solution allowed us to collect rain water in the center of each area to keep cooler temperatures around thematic plazas, providing mid-size scale and diversified public spaces throughout the project.

Our second commission was for the same client also inside the perimeter of Taman-Mini. It was a proposal for an intervention of an existing structure, a Museum named Purna Bhakti Pertiwi at the entrance of the amusement park, and adjacent to one of the largest mosques in the country. The program consisted of a multifunctional complex with housing, hotels, two Television headquarters and commercial areas. Our scheme considered to settle the entire program in two long branches that move sinuously in plan and rise in elevation to create a gate to the existing museum and side entrances to a central plaza. The longer branch contained housing and the other hotel, keeping the entire ground floor mainly for commercial purposes. Through long volumes we could provide natural ventilation for the housing and hotel areas, and for the offices flanking the entrance fully enclosed spaces to provide the comfort needed for working spaces. The proposal also considered a complete reconfiguration of the landscape, with platforms that could create roofs for other activities and resting areas beneath.

We received the commission for a proposal of our third large-scale project in Jakarta, 13 Km away from the center of the city in the Southern District area of Lebak Bulus. The site next to a busy highway and behind a large mall is currently a residential settlement under redevelopment after the planning of a new subway line. The project needed to connect through an elevated passage with a new subway station that will replace a previous stadium already demolished. The program was for commercial areas and showrooms in front of the new station combining public spaces and a concert hall underground. The most significant challenge of the project was two towers containing TV stations and residential facilities, condensing the majority of the program vertically. Our strategy was to stretch circulations as much as possible in all levels, including the areas in the towers, providing public spaces and shadow in the levels below them. We proposed a sunken atrium to provide a micro-climate for the commercial areas with bridges in different levels connecting the spaces. For the towers we designed a stiff core of activities in the center with a flexible perimeter, allowing large slabs serving as balconies to provide shadows and to interconnect the whole structures.

Latvia
From tropical Indonesia we make a leap to Latvia, a completely different cultural and geographical context part of one of the three Baltic Estates in Eastern Europe. With a population of almost two million in the whole country and extreme climate constraints during winter, traditional construction system is still in wood, similar to other Scandinavian countries around the same region. We received a request to design the summer house for a video/film maker in a forest next to the city of Ergli, around 100 KM away from the capital Riga. The site is a unique natural resource, with birch and other tree species surrounding the property and a small river passing nearby. Our approach was to split the program in terms of specific views that each space could appropriate, creating a multidirectional layout in plan and focusing on preserving the traditional construction methods of a traditional Latvian cottage. We aimed to design an exposed wooden structure supporting five points of the shell to create a rhythmical depth within the space. The areas above where thought merely as complementary for storage and to provide a playing room for the kids of the client.

A second commission from the same client came a year later, in order to plan work facilities that could bring direct revenue for him as a video/film maker. The program contained a music recording studio, a small art gallery for his wife, and other rooms for audio/video edition. Being next to the house we had already designed before, we aimed to continue with a similar typological strategy in terms of structure, but also conceiving the sculptural spatial qualities of the venue away from the residential program we considered previously. The plan was again a multidirectional layout in plan with four spaces looking to particular views in the landscape, connected in the center with a lounge that could provide natural lighting from two openings in the ceiling. The wood in the lower part of the project was planned to be collected from old wood recycled from other houses around. The roof in contrast was thought with a different material made of zinc plates from a Swedish provider. 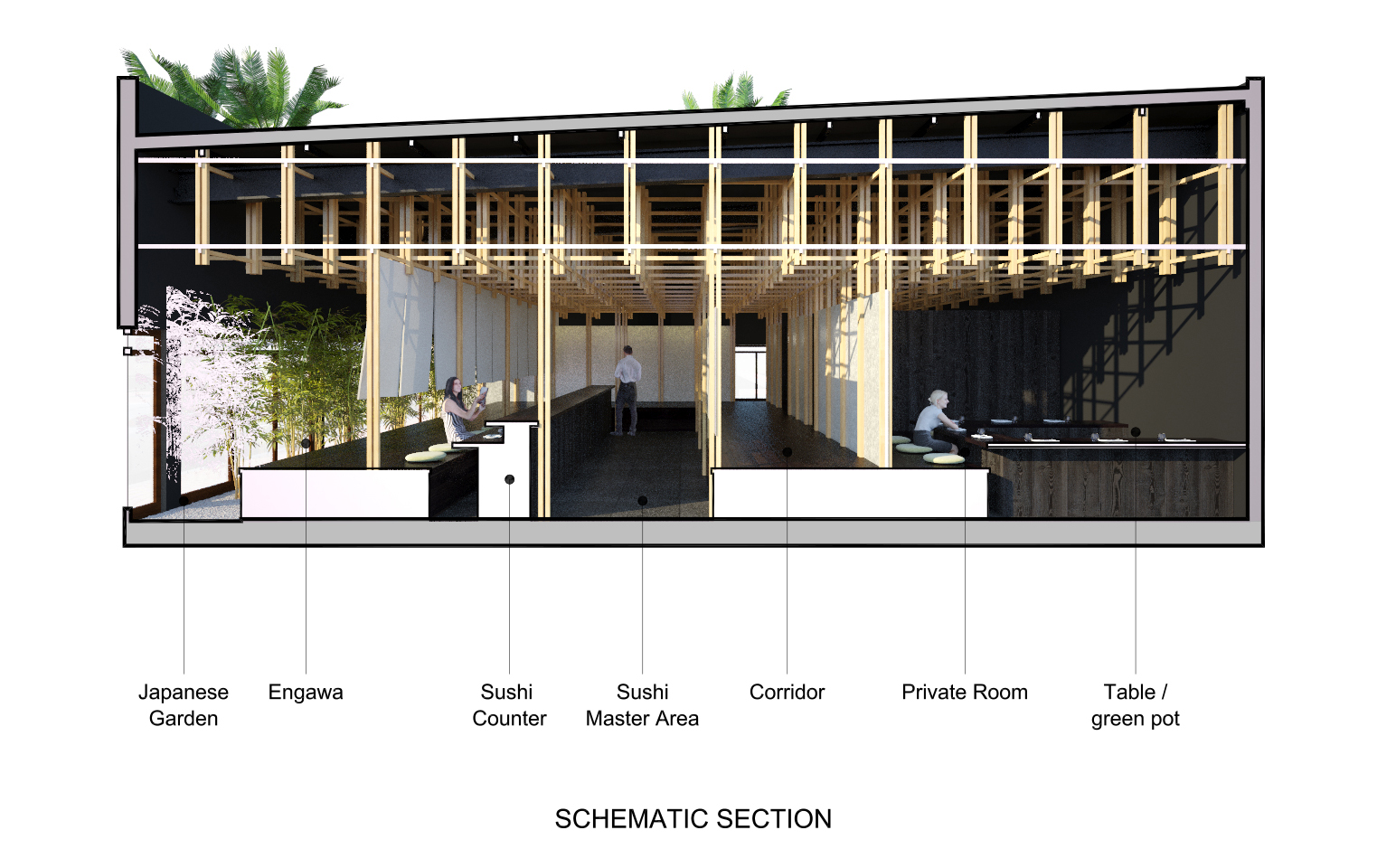 Mexico
Our most recent project took us to the city of Celaya, in Mexico. It is a small-sized city in the middle of the country chosen by our client as a relevant hub to connect with other cities where Japanese car factories are currently operating. The request was the design for a prime sushi restaurant oriented for Japanese executives based in the region. The location was within a commercial complex facing a hotel, next to the highway that enters to the city. Given safety constraints and the little value we found in the context, we opted for having the restaurant completely closed to the exterior, with the entrance to the restaurant in the corner of the local. A small bento-shop connected to the kitchen of the restaurant was planned for costumers to take away. By request of our client we left a relative small amount of seats around and next to the sushi counter, dividing the rest of the program into three private rooms and a larger one in the format of a Japanese izakaya with zabutton seats. The efforts for the design were focused on the ceiling, conceived as an airy wooden lattice structure bringing all the space together. We aimed to design with local wood from Mexico and provide modular solutions for its manufacture, in resonance to that existing in automotive industry. Reflecting on our work, implications of running and architecture practice today arise. We have developed a nomadic mentality beyond the physical constraints of a place, one able to adapt swiftly to relatively unknown contexts.Firstly, our practice is a collective union of independent and equal professionals without someone who could be labeled as the master. Our practice is about overseeing a hive mind. Relationships are horizontal. Secondly, our practice is about designing the processes, starting with exhibitions, pop-up stores and ending up with large scale urban scale projects. It is about setting up collaboration models of partners, roles, purposes – organizational ware, in essence, that is a hidden structure behind the physical design. Design, although being a determinant component for expressing relationships, follows as a logical result.